“…we are in the fourth great crisis [of the Church], in a tremendous confusion over doctrine and liturgy. We have already been in this for 50 years.”

Last year we published a link to a story on the LMS website and in the Catholic Herald about a visit to England by Bishop Athanasius Schneider, the auxiliary bishop of Astana, Kazakhstan, a great friend to the traditional liturgy and a clear and courageous defender of our Faith. 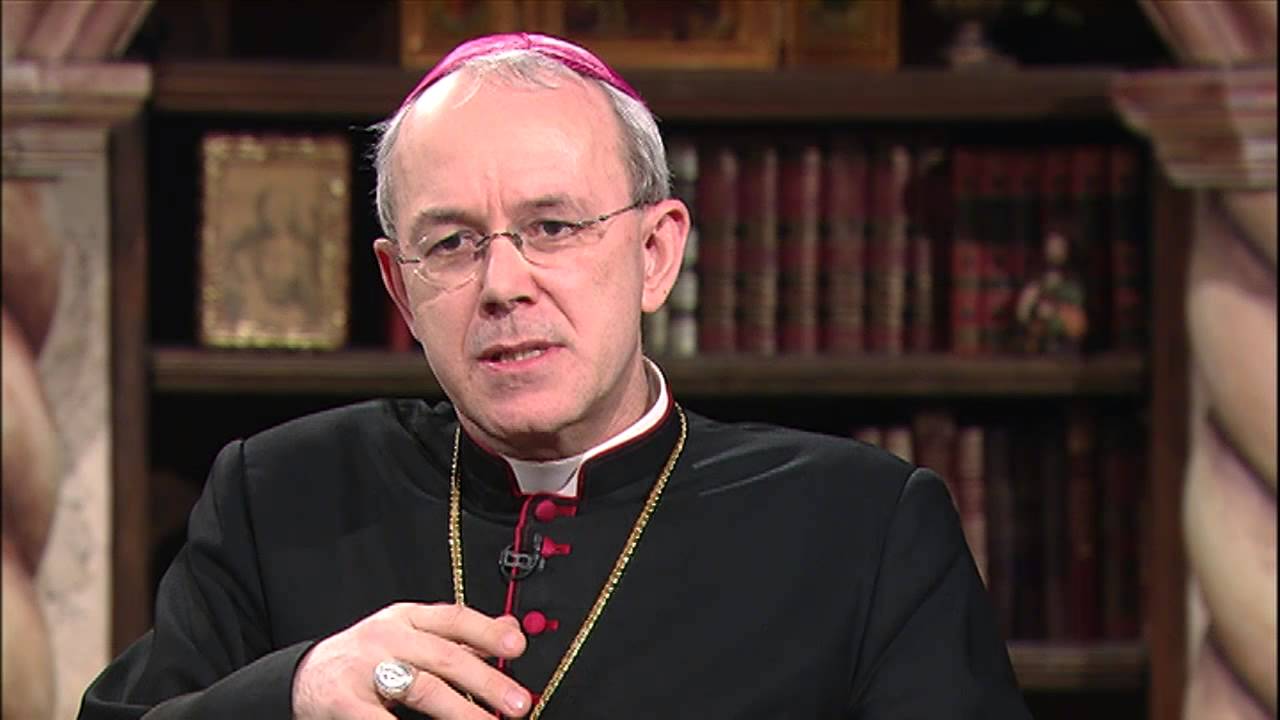 The Oriens Foundation is pleased to support Bishop Athanasius Schneider’s visit to Australia later this month.

In particular, the Oriens Foundation has organised a dinner in his honour on Sunday  20 June in Sydney; see details below.

In his book Dominus Est , Bishop Schneider encourages Catholics who truly believe they are receiving Christ in the Blessed Sacrament to kneel and receive Communion on their tongues: “The awareness of the greatness of the Eucharistic mystery is demonstrated in a special way by the manner in which the body of the Lord is distributed and received”.

Australian-English liturgical scholar and commentator Alcuin Reid wrote in a review of Bishop Schneider’s Dominus Est in The Catholic Herald that the Bishop had “raised his voice in prophetic call for the western Church to recall the importance, if not the necessity, of returning to the previous discipline of the reception of Holy Communion kneeling and on the tongue.”

At a theological conference in Rome in December 2010, Bishop Schneider proposed the need for “a new Syllabus” (recalling the 1864 Syllabus of Errors), in which papal teaching authority would correct erroneous interpretations of the documents of the Second Vatican Council.

In a UK interview last year, Bishop Schneider said the “banal” and casual treatment of the Blessed Sacrament is part of a major crisis in the Church in which some laity and clergy, including some in positions of authority, were siding with secular society. At the heart of the problems, he believes, is the creeping introduction of a man-centred agenda: while in some churches God, in the tabernacle, really is materially put in a corner, while the priest takes centre stage. Bishop Schneider argued that this situation is now coming to a head.

I would say, we are in the fourth great crisis [of the Church], in a tremendous confusion over doctrine and liturgy. We have already been in this for 50 years.

Consistent with his position on the Eucharist, he has attacked the “false concept of mercy ” underlying recent proposals for Communion for the remarried, to be discussed at the Synod on the Family in October:

“This is the deepest evil: man, or the clergy, putting themselves in the centre when they are celebrating liturgy and when they change the revealed truth of God, for instance, concerning the Sixth Commandment and human sexuality.”

Suddenly, though, it struck me that this proposal to wink at widespread sacrilegious communion could not have been made, let alone widely accepted, without fifty years of bad liturgy. Fifty years of minimalist Eucharistic Prayers; no altar rails; versus populi; Special Ministers; Communion in the hand; doing away with striking one’s breast and ringing bells; fast rules that amount to ‘no eating in Church or the carpark’; and guitar hymns about breaking bread, holding hands and walking forward together into the sunset with a song on our lips and hope in our hearts, tra la la.)

Meanwhile, expectations are growing that rules will be relaxed on a range of sexual matters and in terms of divorced people receiving Communion as a sign of “mercy” from the Church.

Such views, according to Bishop Schneider, reveal the depth of the problem.

I think this issue of the reception of Holy Communion by the remarried will blow up and show the real crisis in the Church. The real crisis of the Church is anthropocentrism and the forgetting of Christo-centrism…

This is the deepest evil: man, or the clergy, putting themselves in the centre when they are celebrating liturgy and when they change the revealed truth of God, for instance, concerning the Sixth Commandment and human sexuality.

Although he says talk of change is mainly coming from “the anti-Christian media”, he sees clergy and lay Catholics “collaborating” with what he calls the new paganism. Bishop Schneider is particularly critical of the idea that these changes should be made so as to be merciful to those currently barred from receiving the Sacraments. “[This is] a kind of sophism,” he said. “This is not mercy, this is cruel.”

He suggested this was “a false concept of mercy”, saying: “It is comparable to a doctor who gives a [diabetic] patient sugar, although he knows it will kill him.”

His Lordship will be saying Mass at Lewisham in Sydney on 21 June (10:30), and in Albury on 26 June, and will speak on marriage on Thursday 25 June at 7pm in the Parish of Holy Spirit, Lavington, before heading south to address at the Australian Confraternity of Catholic Clergy (ACCC) at their annual conference in Hobart (June 29th – July 3rd), and to rally our young adults at the Australian Catholic Students Association (ACSA) at their annual conference in Melbourne (4th – 6th July).

As noted, the Oriens Foundation has organised a dinner with Bishop Schneider at

with 3 courses plus drinks for $90 per head.