In October of 1949 at the Congregation of Rites, a liturgical commission was named which… was to study whether eventual reforms should be adopted; unfortunately, the calm necessary for such a work was not possible on account of the continual requests by the French and German episcopates demanding immediate changes with the greatest and most precipitous haste.

NB this is a reprint of a Rorate Caeli article from five years ago, but well worth revisiting at this time.It gives useful and not-widely-known background to the later and more ambitious program of liturgical reform, and introduces some familiar figures. As it happens a friend and I were speculating about the reason for the red cope on Palm Sunday; I’m still a bit puzzled… Ed. 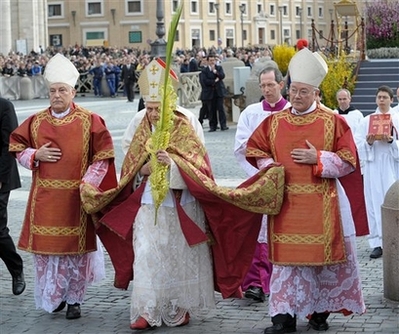 In the course of recent years, the publication of numerous studies concerning the history of the theological and liturgical debate of the 1950’s has cast new light on the formation and the intentions (which were not always openly declared at the time) of those who were the actual composers of certain texts.

As regards the work of the reform of Holy Week in 1955 and 1956, it is desirable to consider the declarations, finally made public now, of the well-known Lazarist Annibale Bugnini, and of his close collaborator and later secretary of the “Consilium ad reformandam liturgiam” Father Carlo Braga, and of the future-Cardinal Ferdinando Antonelli, in order to establish whether or not their work of liturgical reform corresponds to a wider theological project and in order to analyze the validity of the criteria used and then reproposed in the reforms that followed. We shall consider the notes and minutes of the discussions of the preparatory commission, preserved mainly in the archives of the Congregation of Rites and recently published in the monumental work of the liturgical historian Msgr. Nicola Giampietro, which testify to the tenor of the debate.

« On the Restoration and Promotion of the Traditional Mass